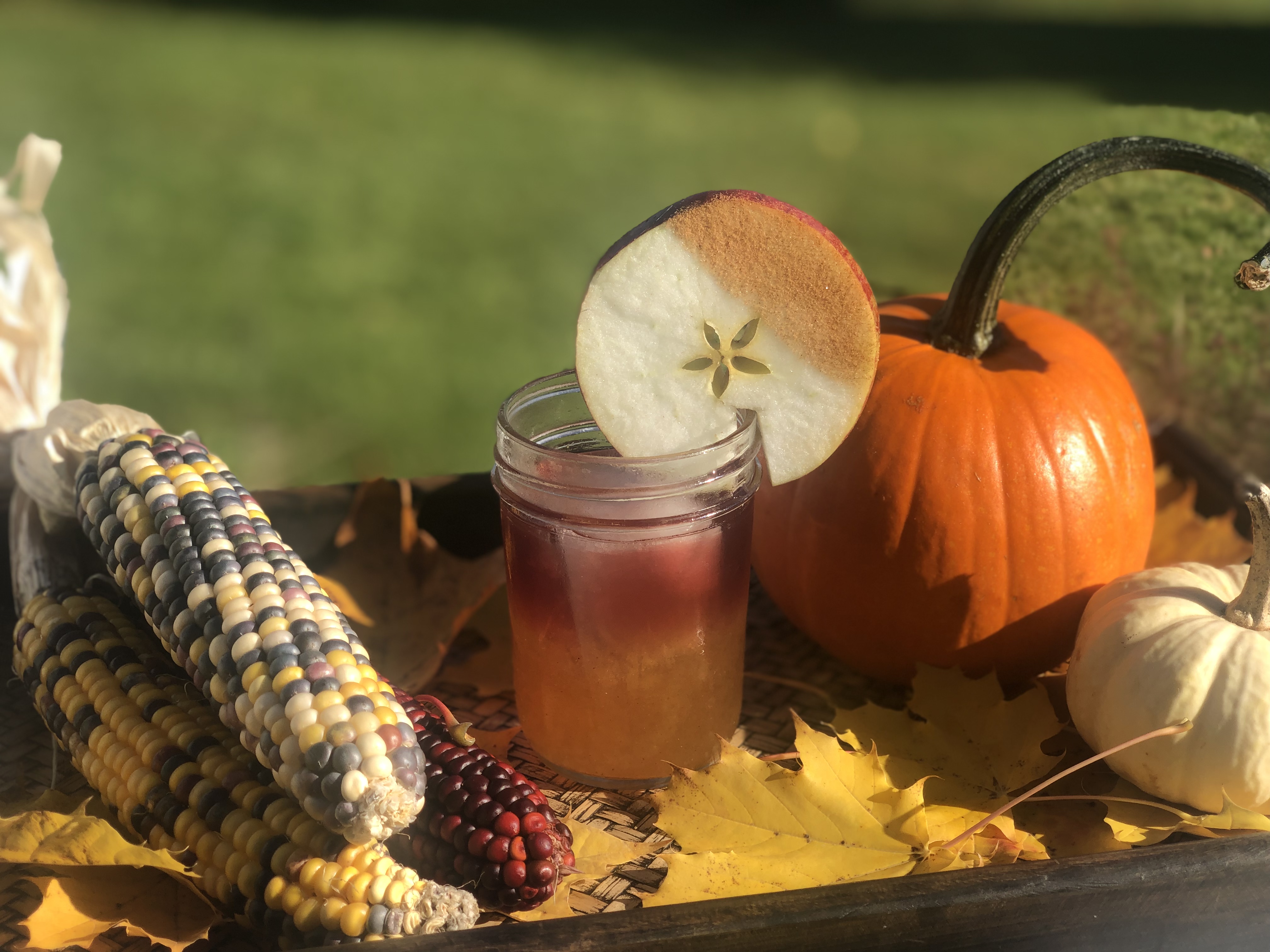 Fall is always a time to reconnect with friends and family who we didn’t get to see in the height of summer. This week, an old shipmate and friend paid us a visit and that was occasion enough to make a festive and fun fall cocktail.

We call this drink a Rockland Sunset in our house for the way the layers settle to resemble a sunset sky. Typically, I use bourbon & and an orange-cardamom simple syrup, but in the spirit of the season I substituted a homemade apple cider syrup and a nice bottle of rum we had set aside for a special occasion. The layering effect is created by thickening the rum or whiskey with simple syrup so it settles to the bottom of the glass. By carefully pouring the floating layer over a spoon, you can create a cocktail that is visually-interesting and dynamic as the ratio of wine to the base layer changes.

I started by making a simple syrup by cooking down apple cider from Beth’s Farm in Warren with brown sugar and cinnamon. I made the simple syrup thicker than I might otherwise have so that the wine would eventually be able to float on the surface. For this drink, I used Eight Bells Rum as the base. Eight Bells Rum is a gold rum that is aged 3 years in bourbon barrels right here in Portland, Maine by New England Distilling. I chose this rum because it tastes like mulling spices and finishes like caramel which pairs perfectly with my apple cider simple syrup. The red wine on the surface is Rogue Admirals Red Blend. Rogue Admiral is a South African wine, but you can substitute any dry red wine for the same effect.

I combined 2 oz. of rum with ¾ oz. of the apple cider syrup and ½ oz. of lemon juice in my shaker and shook it with ice until it was combined. I poured that into a rocks glass over a whiskey rock. To get the layering effect, I carefully poured 2 oz. dry red wine over the back of a spoon. The thick mixture on the bottom is heavy enough that the red wine remains on the surface. I garnished this mixed drink with a wheel of apple dipped in cinnamon sugar.

This drink was the perfect way to kick-off our visit, and we will definitely be making these again soon.

One long held tradition which distinguishes the J. & E. Riggin from the rest is that of maintaining hives of honey bees. We started keeping bees last Spring and finally produced enough honey to harvest. This week, we took time to collect that honey, and thought we would share with you its journey from our hive to your tea cup. We believe knowing where your honey comes from makes each sip a little sweeter!

We start by removing each frame from the super. The super is the box in which the frames hang. We then carefully scrap away the thin layer of wax on the surface to reveal gooey delicious honey.

We use a manual-crank extractor to spin the frame, sending the honey whizzing to the outside where it runs down into a basin in the bottom. Justin cranked a lot to warm up his anchor raising muscles!

After a spin, we return the frames to the super, leaving behind an empty comb for the bees to refill with new honey from the spring flowers.

The extractor is now heavy with honey, wax, and chunks of pollen. Now, it’s time to filter it…

Through finer and finer mesh…

Until there are no visible pieces of wax. Then, we took a taste, and it was delicious!

The honey was then put into jars which we will crack on the boat this summer. It’s a taste of our home made specially for you, courtesy of our hardworking little bees!

Christmas this year saw fewer people around our table. Usually, Justin and I spend the holidays with my family in Ohio.

Each year we are seated around the table with brothers and parents, aunts, uncles, and cousins, eagerly awaiting a delicious dinner prepared by my maternal grandmother, Alice. On the menu, the Christmas ham.

My grandmother, being a true Midwestern woman, always made more food than we could possibly eat in one night. And it was from these leftovers that my father’s ham and navy bean soup would spring.

My father grew up in a large catholic family in the suburbs of Chicago. His mother, Rosemarie Claudia (Haskin) Schmidt, had 10 children, the youngest of whom was my father.  In a family of that size, nothing could be wasted, so it was not unusual for left over meat to remerge the next day, given new life in a warm bowl of soup.

Each year, after Christmas, my father would collect the ham bone and left over ham and make a stock by leaving the bone to simmer overnight with thyme, sage, and rosemary in an enormous soup pot. The following morning, he would remove the now clean bone and the herbs, adding carrots, celery, onions, garlic, navy beans, and the leftover ham which he had cubed back into the pot.

This soup recipe some years produced so much soup that he would freeze it, so it could be heated and enjoyed several times throughout the winter, each steaming spoonful serving as a reminder of the holiday and the gathering of family.

This year, we could not safely make the trip to Ohio to see my parents and brothers. Like many across the country we opened gifts over zoom and wished one another a merry Christmas on the phone. Justin and I, hoping to hold on to some of the traditions that define this season for us, prepared our own ham for Christmas dinner. That night I called my dad, who chatted on the phone with me while I prepared the stock with a hambone of our very own. Despite it being the two of us for now, I made a large batch and froze a few portions. This winter on cold lonely days, I will warm up some of my father’s soup, prepared by my hands, and enjoy it knowing that time spent in the company of family will come again soon.

On Friday, October 25th from 11:30 a.m to 1 p.m. Chef Annie will lead a cooking class at Stonewall Kitchen in York, Maine. She will be making recipes from her cookbooks including the following:

If any of you happen to be or live in the area sign ups are happening now on the Stonewall Kitchen Cooking School site!